On Friday, September 16, the School of Health and Rehabilitation Sciences (SHRS) was finally able to come together to celebrate its 50th anniversary of academic excellence at the University of Pittsburgh and to recognize distinguished SHRS alumni on their career achievements. After two years of postponement, faculty and alumni gathered at the University Club in Oakland to reminisce on their time at Pitt and toast to each other’s success.

Dean Anthony Delitto opened the ceremony by reflecting on the progression of SHRS’ reputation since it began admitting students 53 years ago. He explained that the School of Health Related Professions, or SHRP, as it was called at the time, was “the place to be” for anyone pursuing the field of physical therapy in the 1970s, and then by the 1990s the school set course on an agenda to seal its reputation as a competitive research institution that continues today. The past decade has seen SHRS expanding its footprint with new and online hybrid programs to meet the needs of modern health care practitioners beyond Pitt’s urban campus. For the future, Delitto boldly proclaimed, “We are not finished innovating in education.” In conclusion, the dean instilled that excellence in education has permeated throughout SHRS’ half century, which was a perfect segue to honor the 14 alumni who were present to accept their awards and share with the audience how SHRS was a springboard to their career.

As each awardee spoke, it was clear to the faculty and guests in attendance that SHRS has made a lasting personal and professional effect on its students. They shared stories of enduring gratitude for the knowledge and skills they gained at SHRS and for the faculty who never doubted what they could accomplish. Sometimes it was a teacher administering a dose of tough love by sitting their student down and setting their priorities straight, or by opening a doorway of opportunity and lifting them up with confidence that the world had not yet instilled on them. 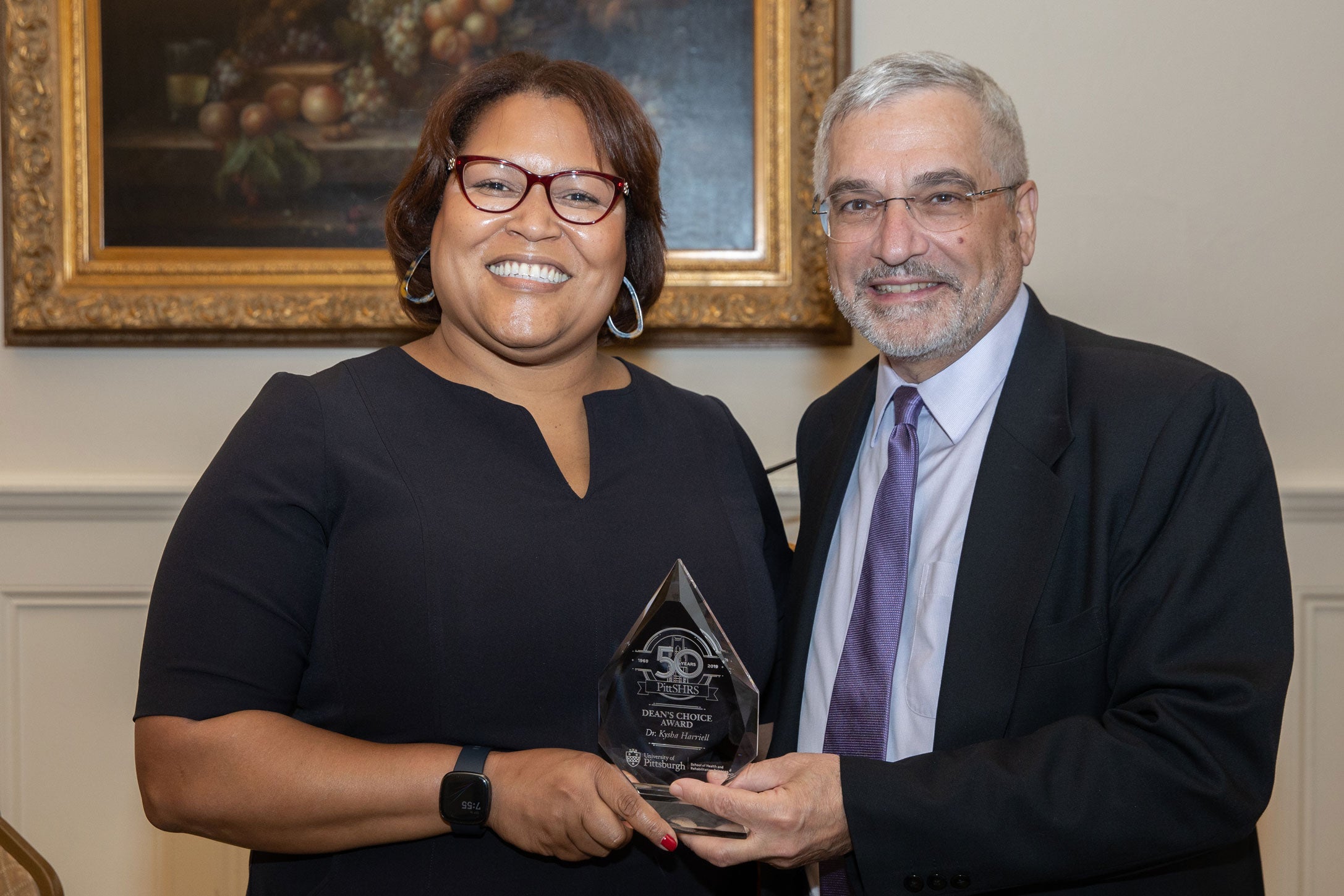 Dean’s Choice Award winner, Kysha Harriell (AT, BS ’96), proudly declared that “Everything I’ve done in my career I can directly attribute to the support and education that I received at the University of Pittsburgh.” She continued to praise the late Dr. Freddy Fu for his support and whom she credited for “all my work in diversity.” As an undergraduate student, Fu encouraged her to attend her first professional conference and to work with their ethnic diversity advisory committee for which she is now the national chair 20 years later. 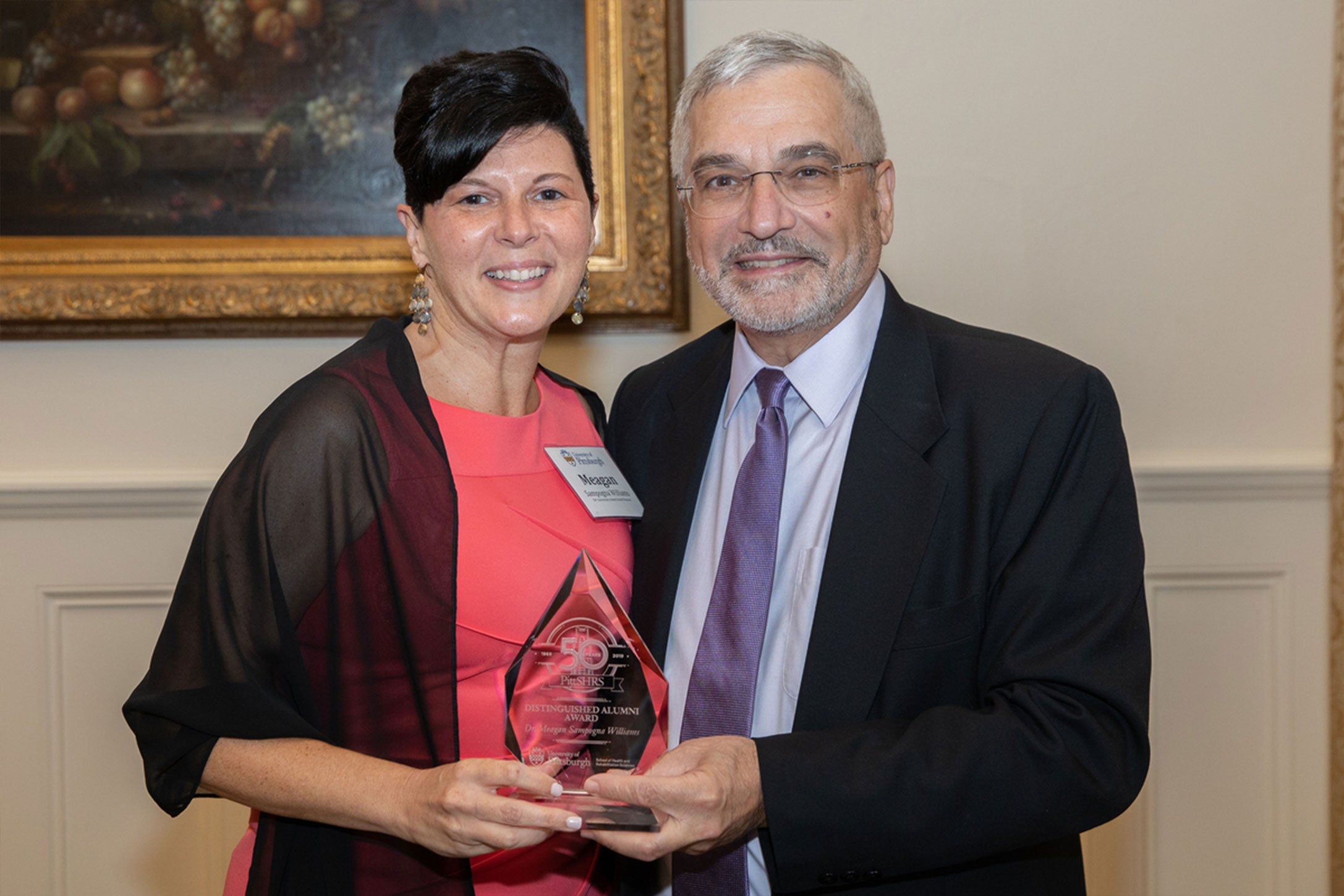 Meagan Sampogna Williams (HIM, BS ’00) when receiving her Distinguished Alumni Award said, “I never knew that taking a step into the HIM (Health Information Management) program at the University of Pittsburgh was going to change the trajectory of not only my education, but for my career.” She had met obstacles with her disabilities at another university, but once at Pitt she said, “One thing that will always stay with me is that the University of Pittsburgh not only embraced me, but helped me navigate. They not only gave me an education, but gave me confidence, and that confidence not only led me to a degree here but a master’s and a doctorate. I am now a president and chief operating officer in the pharmaceutical industry treating rare diseases across the U.S. I love giving back to this university because they gave me a great deal.” 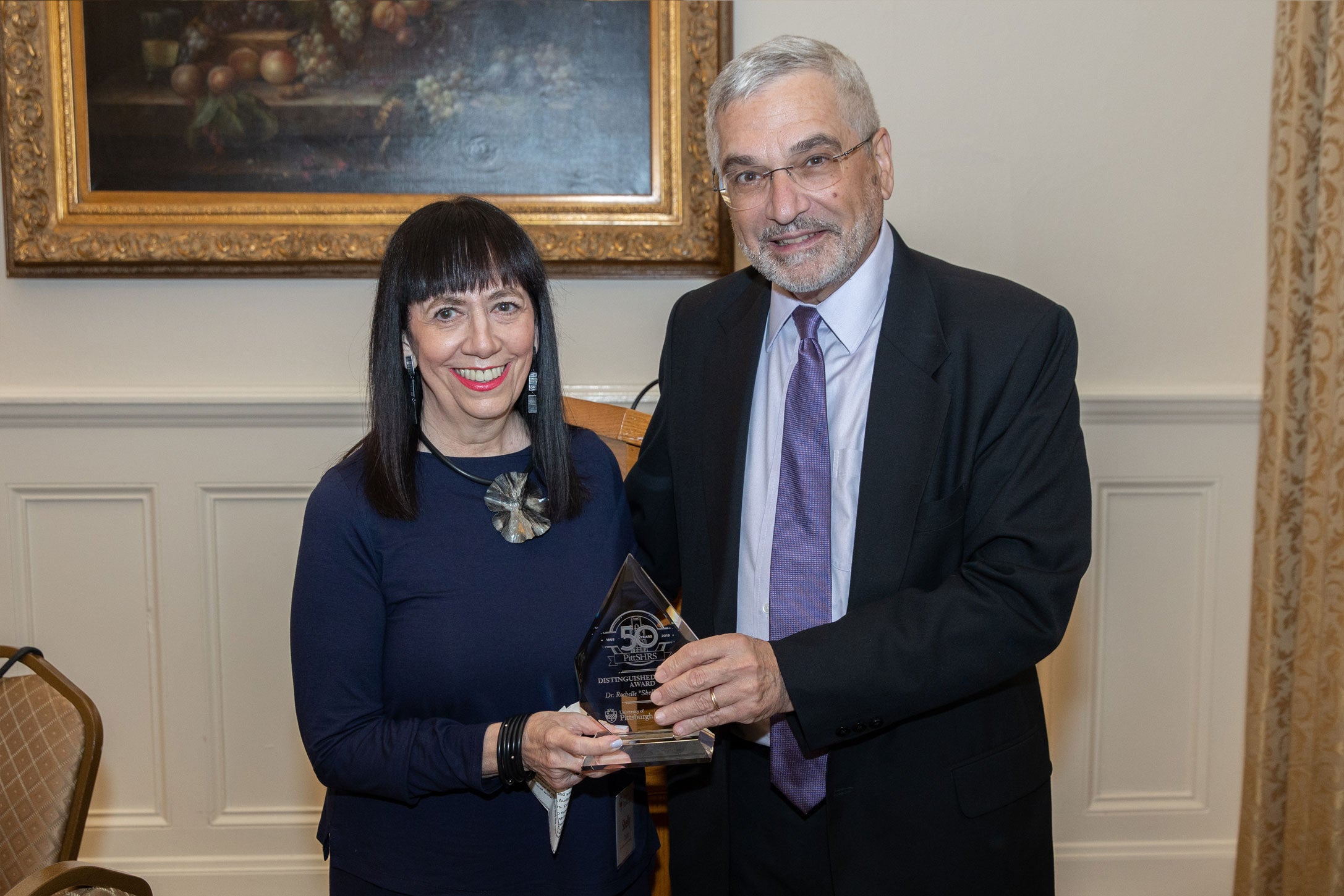 The awardees’ reflections were also about friendships forged with like-minded classmates passionate about their chosen path in health care that have continued decades later. Shelly Chabon (CSD, PhD ’80), another Distinguished Alumni Award winner who sat with her former classmates all evening, said, “Pitt is where my academic career started, where I experienced the joy of teaching, the promise of research and the complex personal management of clinical work in speech-language pathology and audiology. What I’m most grateful for are the friendships that were started here and that continue to this day.” She met her friends Diane Eger and Noma Anderson in the Communication Science and Disorders program many years ago and they’ve all gone on to become influential researchers and teachers in the field. The audience could feel their bond as Chabon described, “I met Diane and Noma at Pitt and they are still a part of my life: still making space for me and still encouraging me to turn towards what is difficult.” 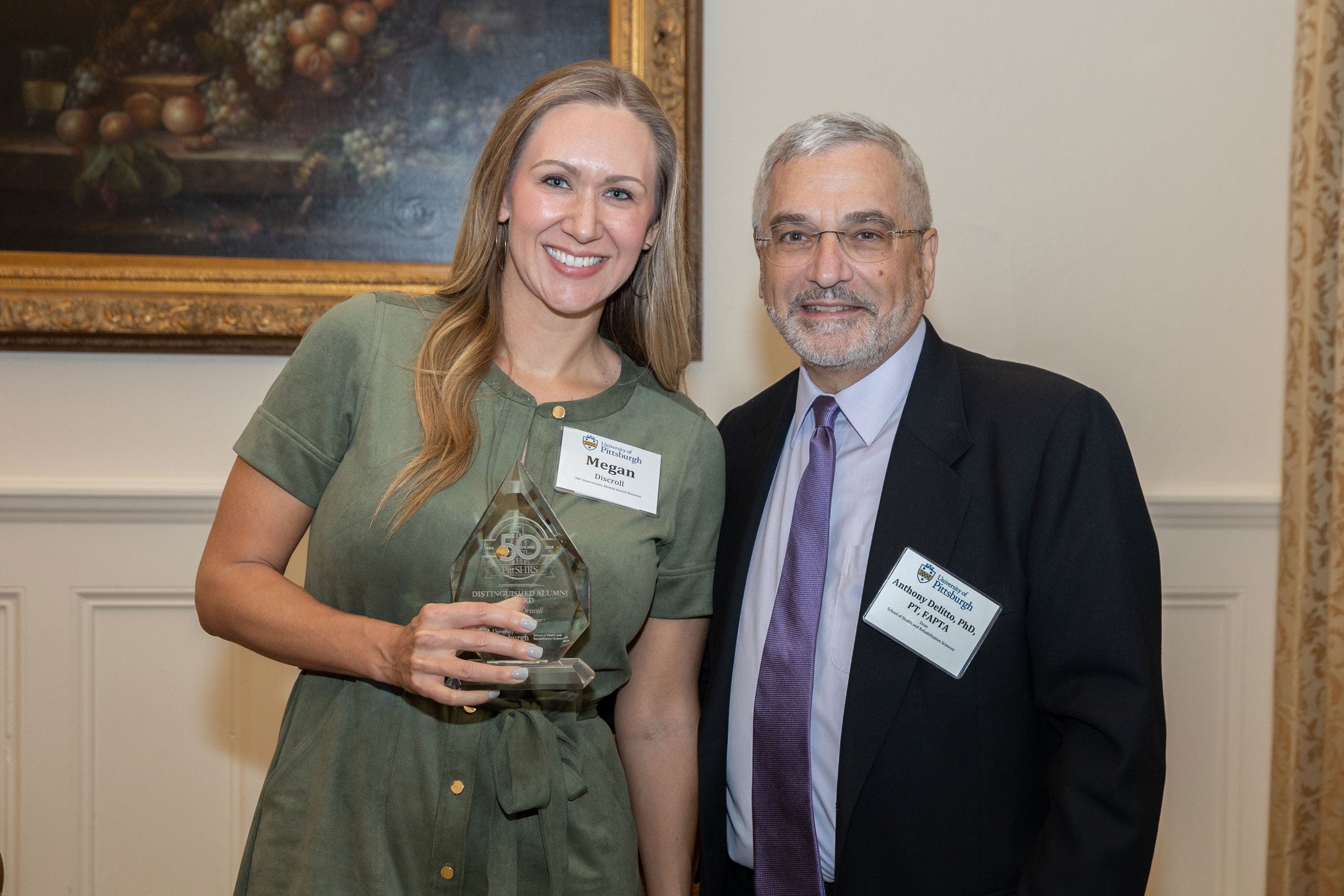 As Pitt alumni have shown through the years, whether it was 75, 50 or five years ago, it is the sense of belonging that never ends after graduation. It is the support of the faculty who encourage them to boldly reach farther than they ever imagined. It is seeing what’s possible through their mentors and realizing they have that potential, too. As Megan Driscoll (OT, MOT ’12) told the audience, “Probably the most amazing thing that I experienced was a sense of community. I felt really included. And I felt that these were really intelligent, amazing people doing really great things and that really inspired me and it continues to do so.” 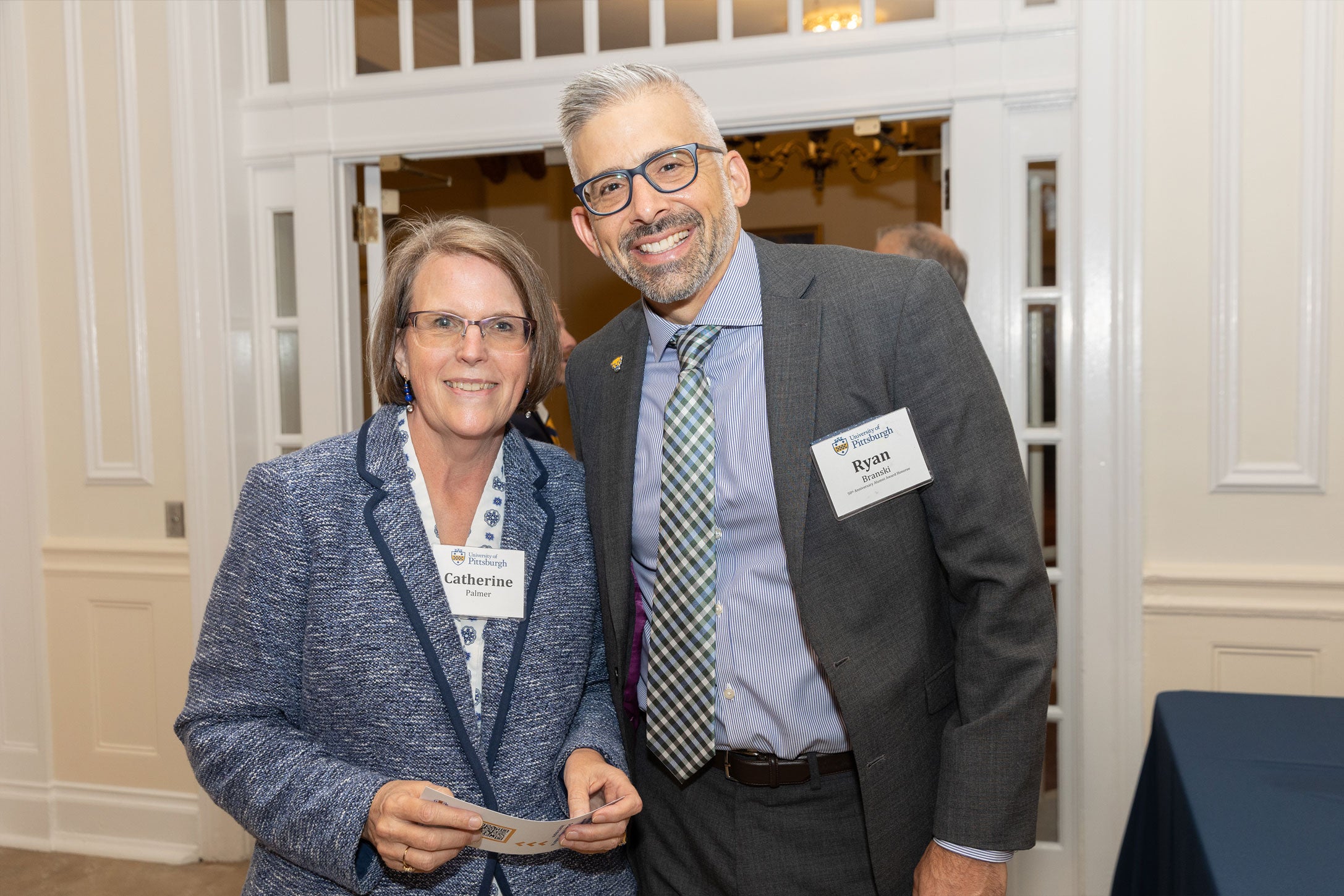