The University of Pittsburgh School of Health and Rehabilitation Sciences (SHRS) has appointed its own accomplished faculty member—an occupational therapist and highly regarded scientist—as chair of the Department of Occupational Therapy. Associate Professor Juleen Rodakowski steps into her new position on June 1. After a yearlong national search, the committee selected Rodakowski for her bold vision and demonstration of exceptional abilities to lead the department in its ongoing pursuit of excellence in academics, research, equity and inclusion, and service through partnerships regionally, nationally and internationally.

“Juleen is an extremely bright and committed faculty member whose scholarly productivity is impressive and whose dedication to the OT profession is unquestioned,” says Dean Anthony Delitto.

Rodakowski’s vision for the department reflects this commitment. “I aspire to promote equitable occupational therapy services that maximize wellness and community living for all people through meaningful activities," states Rodakowski.

Her own research is already driving such change by arming the geriatric and rehabilitation disciplines with evidence, methods and applications to support the “aging in place” of vulnerable older adults by addressing their own needs and the needs of their caregivers. Her federally funded research, totaling over $4 million, seeks to slow the progression of disability attributed to early changes in cognition. Her research also seeks to optimize the health and wellness of caregivers thus minimizing the need for the institutionalization of older adults with cognitive disorders. Her ongoing studies have far-reaching implications in these areas, influencing when, how and why rehabilitation services are provided to older adults living in the community. Her work generates the evidence required to support new, effective models of community-focused care that are responsive to public health needs and evolving federal policies.

“Juleen’s research was among the first to demonstrate that older adults with Mild Cognitive Impairment perform activities of daily living differently than older adults with normal cognitive aging. In doing so, her research helped to redefine perspectives on Mild Cognitive Impairment and emerging disability among older adults and provided impetus for routine screening and early intervention in this growing population,” explains SHRS Associate Dean of Research and previous Department Chair Elizabeth Skidmore. 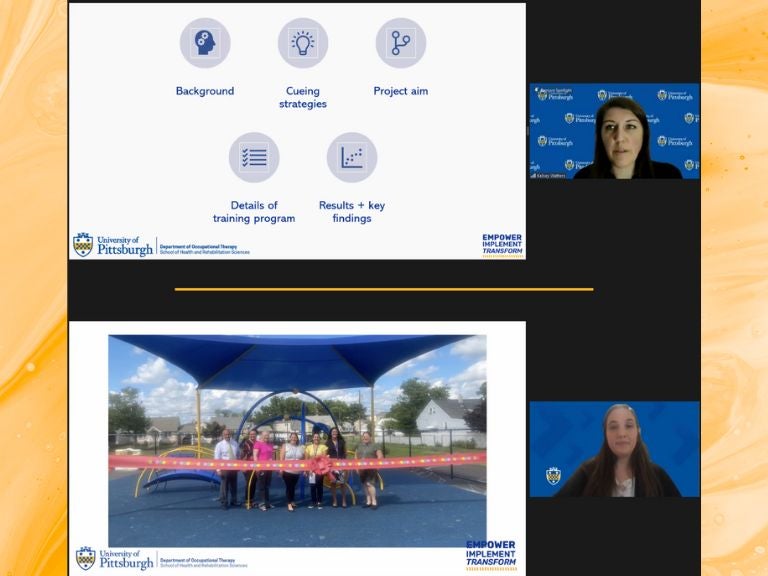 As Pitt Occupational Therapy commemorates its 40th anniversary, the department celebrates the appointment of its fourth chair. Rodakowski joins a strong legacy of leadership and service. In 1982, founding chair Caroline Robinson Brayley laid a solid foundation for years of ongoing excellence by starting Pitt’s bachelor’s program in occupational therapy, the first of its kind in Western Pennsylvania. In 1998, Joan C. Rogers, an internationally recognized scientist in occupational therapy, arthritis and gerontology, established the department’s robust research agenda and grew it to obtain funding from prestigious sources, while quadrupling the department’s faculty. Elizabeth Skidmore took the reins in 2015 as Pitt OT’s third chair. Under her leadership, the department expanded its academic offerings and its entry-level program rose in the rankings, from #4 to #3, according to the most recent surveys of best graduate schools by U.S. News and World Report. The department’s research portfolio also grew exponentially, leading to national and international recognition. Skidmore will continue to advance the profession through her role as associate dean of Research for SHRS.

Rodakowski is eager to continue the department’s upward trajectory. “I am most excited about the strength of the Pitt OT network,” states Rodakowski. “I desire to work alongside this group to move us into the future. We have impressive former, current, and future students and trainees.”

Her colleagues share this sentiment. “Through the interview process, it was clear that Juleen has the respect and support of the department’s faculty,” says Dean Delitto.

“I am delighted to leverage my joy as an educator and passion as a researcher to create the occupational therapy of the future through our academic programs and scholarship,” shares Rodakowski.